Last post by Michael Gonsalves - Jul 29, 2022, 01:33 AM
Last month, the stock markets were in such a bad shape, that a Put of 2000 shares that I had sold of the Bajaj Finance 5800 strike price had devolved upon me and I was forced to take delivery. The stock was sinking fast and so I hurried to sell a Call at the same strike price of 5800.

Unfortunately, in the meantime, the markets have turned from aggressively Bearish to aggressively Bullish. Bajaj Finance shot up an incredible 10.6% today to close at Rs. 7076.

As today is the expiry, no adjustments are possible and I have no option but to give delivery at the strike price of Rs. 5800. 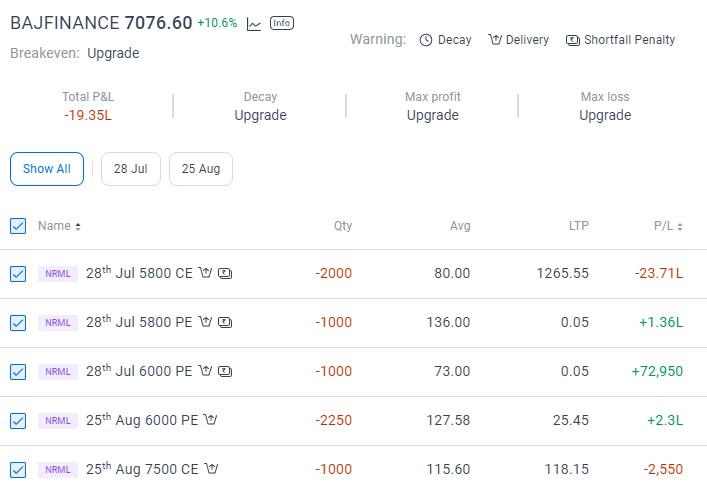 Last post by Michael Gonsalves - Jul 29, 2022, 01:25 AM
Edelweiss and other noted experts like Antique Broking, Prabhudas Lilladher have recoommended a buy of Sharda Cropchem for a target price of Rs. 958.

"We continue to believe that SCC will witness market share gain and margin improvement in subsequent quarters. We retain 'BUY' with a revised target of Rs 958 from Rs 916 earlier, as we roll forward to Q2FY24E," Edelweiss said in the research report.

Sharda Cropchem is presently out of favour because of its poor June quarter results. There is a 41 per cent year-on-year (YoY) reduction in the company's profits.

This was mainly because of the adverse currency movement and forex losses.

The management of Sharda Cropchem is confident of achieving an 18-20 per cent growth in FY23E. t will take corrective measures with regard to the adverse efeect of currency. It is also focusing on new product registrations and scale-up of existing molecules which will improve the Ebitda margins to 18-20 per cent.

Antique Stock Broking has also recommended a buy of Sharda Cropchem for the target price of Rs 760.
3

A detailed description of the six new stocks is as follows:

It is not known why Dolly Khanna bought 12.27 lakh shares of Suryoday Small Finance Bank when it is a poor performer. Possibly she is hoping there will be a turnaround.

Dolly Khanna bought 3.69 lakh shares of Monte Carlo Fashion in the June quarter. This stock i also a multibagger. The Company is engaged in the textile business and sells branded garments like cotton wear, woolens, kids wear and home furnishings.

Manali Petro is a smallcap stock that added 26 percent in the last 1 year. Khanna bought 18.78 lakh shares of the firm worth ₹19.5 crore in the June quarter. The Company is engaged in the manufacture and sale of petrochemical products. Its products are used as applications in various industries, such as appliances and thermoware; automotive; bedding and furniture; construction, etc. The stock has lost around 4.5 percent in 2022 so far.

National Oxygen manufactures industrial gases, such as Oxygen and Nitrogen. It is also engaged in wind energy generation. It is a supplier of industrial gases both in liquid and gaseous forms. Dolly Khanna holds 51,784 shares.

Sugar and ethanol stocks are in favour because of the benign policy of the government.

Zuari Global has ambitions to expand the ethanol business.

It is developing a distillery to produce ethanol in India and supply it to the state-owned oil marketing companies to meet their blending requirements as specified in the biofuel policy.

The company has strong future prospects and expects to grow the business to achieve a total capacity of 1,000 kilo liters per day of ethanol.
5

Not much is known about Suryoday Small Finance Bank. It recorded a 21 per cent rise in total deposits to Rs 4,020 crore on a yearly basis, during the first quarter of the fiscal year 2022-23.
6

Last post by Michael Gonsalves - May 31, 2022, 06:08 AM
Asit Baran Pati has disclosed his profits and gains from options buying. The profit run into several lakhs and crores in various accounts. Have made more than 7-8 times return on 8 figures. Screenshots are 25% of what I have done for today, he said.

Last post by Michael Gonsalves - May 22, 2022, 04:53 PM
Asit Baran Pati has announced the start of a mentoring session where he will share his intraday and positional trade setups based on Ranking System. This involves giving Buy calls on the stock and Index options. The subscription fee is ₹5,499 for 1 month (inclusive of 18% GST).

Last post by Michael Gonsalves - May 22, 2022, 04:47 PM
PR Sundar revealed that on 19th May, he was carrying Bullish positions (presumably Put shorts). However, this backfired badly because the markets plunged like a stone because of relentless selling by the FIIs.This caused his to suffer a huge MTM loss of Rs. 1 crore.

"It is the worst day of my trading career," he said in a mournful tone.


He also stated that the huge loss had occurred because he had not paid attention to the position sizing and had made many silly mistakes.

"Even after so many years of experience, have gone wrong in position sizing and made few other silly mistakes, markets have chosen to teach me expensive lesson," he stated.

Last post by Michael Gonsalves - Jan 19, 2022, 01:29 AM
I opened a Call Calendar at 38700CE. However, the Bank Nifty immediately plunged and breached my BEP of 38300. This forced me to open a Put Calendar at 38000PE. The Calendar is bleeding and I have already lost 2.48% MTM. However, if the Bank Nifty expires within the range and the ViX does not plunge much, I can take home a tidy profit. 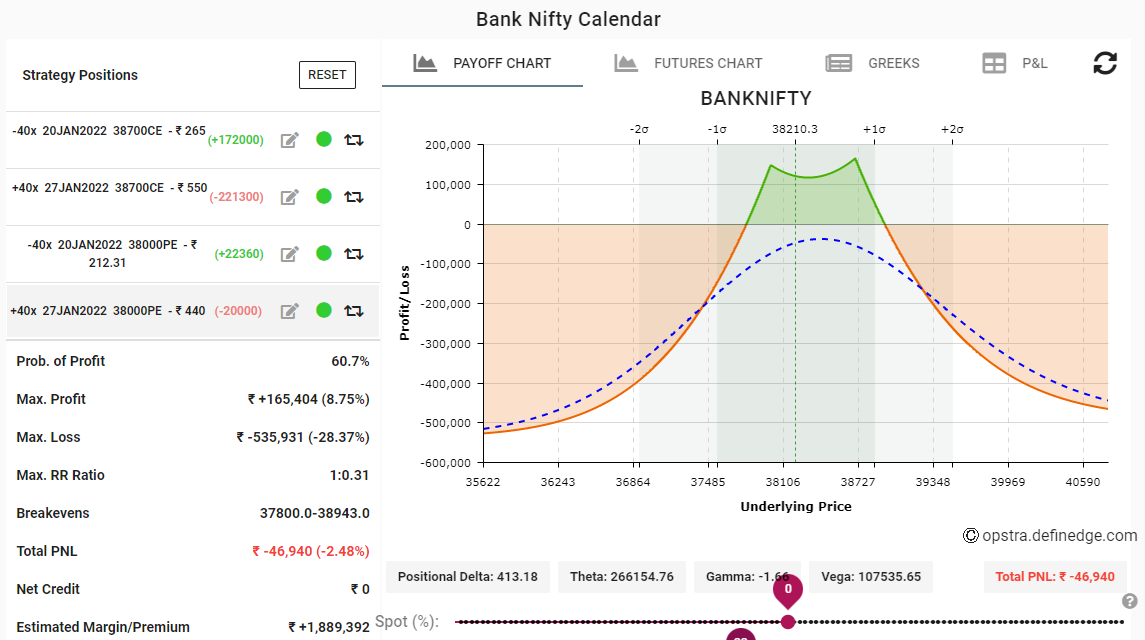